skip to main | skip to sidebar

This is the jackalope's first video editing project. However, the truth of the project stands clear. While Chet Edwards talks "moderate" here in District 17, he has aspirations of higher positions in the Democratic Party and will vote against the best interest of the people to achieve that goal.
Posted by Nancy Coppock at 6:53 AM No comments:

20/20 For Rob Curnock for Congress

The Jackalope is starting a web campaign to raise funds for Rob Curnock For Congress.

The plan is 20 for $20.00 and the Jackalope has made it easy with the SlateCard widget right here on The Jackalope's Voice. Just click on the contribute button and fill out the form to contribute $20.00 (or more) and then email 20 friends asking them to do the same.

The Jackalope's Voice is volunteering her blog to work for the campaign and I would appreciate her readers use this blog for raising web contributions. All money goes directly to Rob's account. However, this volunteer would like to show not only the power of the web, but also the benefits of her creativity. The hardworking farmer ought to receive credit for his hard work.

Chet Edwards (D-17TX) is Nancy Pelosi's choice for Obama's veep. That should speak volumes for those that believe in economic and political freedom.

Remember: Without Economic Freedom, Political Freedom is meaningless.
Posted by Nancy Coppock at 11:41 AM No comments:

So, let me get this straight, Obama doesn't think he should help his half-brother because he doesn't know him. However, he thinks taxing us to help people we don't know is a sign of his munificence and caring for others.

Okay, I'm trying to get this straight: Obama doesn't think he should help his own half-brother who is living in a 6'x9' African shack, because he doesn't know him. But Obama thinks taxing us in order to help people we don't know is a sign of his munificence and beneficence to the world.

Right, I'm still trying to get this straight....
Posted by Nancy Coppock at 9:30 AM No comments:

What do Obama and Osama have in common?

They both have friends that bombed the Pentagon (William Ayers)!

It's just not safe to vote Democrat.

Rob Curnock for Congress
Posted by Nancy Coppock at 8:48 AM 1 comment:

The Republican Congressional leaders staying on in the lights off, microphones off, and cameras off House Floor should be wary of Speaker Pelosi's change on oil drilling. The "All of the Above" Energy Plan is a good plan. It deserves an up or down vote.

However, the jackalope disagrees with the idea that this is not a Republican or Democrat issue. She believes that when the economic freedom of the United States is at stake, then the political party standing in the way of that freedom deserves scorn, derision, and ultimately, loss of any political power.

The Democratic Party-controlled Congress made their choice when they voted to adjourn for summer vacation. When party unity stands in the way of economic freedom, that party no longer serves as defenders of the Constitution.
Posted by Nancy Coppock at 6:52 AM No comments:

The Democratic Party-Controlled Congress is pandering to their constituents on the price of gas and oil.
What do they offer?
What happens in the case of a national emergency if reserves are not available?
A waste of taxpayer's money. No investigation has turned up an evidence of criminal activity.

Leases are a gamble for the oil company. The truth is that the oil companies need the freedom to drill in the best location for their needs, not the needs of a bureaucrat in Washington.

Posted by Nancy Coppock at 12:06 PM No comments:

The Pelosi Premium and her Democratic Party-controlled Congress have been hard at work for you. Speaker Pelosi began the 110th Congress with the pledge that she and Democratic Party House Leadership had a plan to fix the rising price of gas. 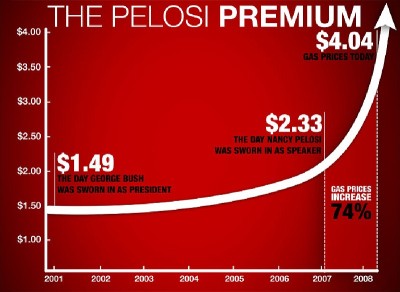 Does Texas District 17 want to send a man to Congress that will give power to a political party unable to grasp the results of their own deed?

Without the freedom to control your private property, political freedom is meaningless.
Posted by Nancy Coppock at 11:55 AM No comments:

The jackalope loves seeing these protestors outside a Borders Bookstore in Ann Arbor, Michigan, while Nancy Pelosi is inside on her book signing tour. Drill Here, Drill Now, Pay Less!

This is a movement of the people and by the people. This is a (r)epublican Revolution made up of rugged individuals committed to the cause of freedom. Without Economic Freedom, political freedom is not possible. Congress must not be allowed to stand in the way of their constituents Economic Freedom.
Posted by Nancy Coppock at 11:21 AM No comments:

Ever wonder how hard the 110th Democratic Party-Controlled Congress has worked for us? Let Uncle Jay 'splain it to you. Enjoy

Proving they live in an alternative reality that is funded by the deep pockets of George Soros - a man that has made it his mission in life to bring the United States down to servant status to the United Nations - MoveOn.org will stage a rally on the Capitol steps today at 4:00 p.m. Eastern to protest the "gimmicks" of the oil companies that want to drill off-shore.

“Republicans have been escalating their attacks on [Democratic presidential candidate Sen. Barack Obama (Ill.)] and the Democrats over oil drilling, and we need to push back hard,” the group said in an e-mail to supporters, asking them to come to a 4 p.m. rally at the Capitol.

“Speaker Pelosi blocked their plan because it won't help lower gas prices—but it will line the pockets of Big Oil executives, the same people donating millions of dollars to Republicans,” the e-mail said. “But Republicans are working hard to make it seem like they're fighting for cash-strapped commuters—and not the oil companies who wrote their plan.”

The group plans to point to the ties between the GOP and Big Oil.

“We’ve invited the media, and having a good crowd is critical to show them that voters don’t want oil industry gimmicks—they want real solutions like alternative energy to solve our energy crisis,” the e-mail said."

This is an all expenses paid rent-a-mob. Do not be fooled into believing the group speaks for any real, everyday Americans. The representatives of those Americans are inside the House talking about the "All of the Above" Energy Plan. #dontgo.

Posted by Nancy Coppock at 11:54 AM No comments:

Please sign the petition to have Congress come back from their vacations to vote on The Energy Crisis and solutions. The Republicans are behaving like adults when faced with a problem. Speaker Pelosi is merely running the clock out for the 110th Congress until Obama can be elected President.

High gas prices not only affect Americans at the pump, but every product we buy.

Sign the petition and spread to friends and family.
Posted by Nancy Coppock at 8:53 AM No comments:

In considering the events going on this week in the House of Representatives, Texas District 17 should know that Rep. Chet Edwards voted to adjourn for a 5 week break rather than vote, or even debate, on solutions for the nation's Energy Crisis. 15 Blue Dog Democrats had the spine to stand against Speaker Pelosi and voted "Nay" to the adjournment. Chet Edwards (D-TX) was not among these noble men. Those 15 put the prosperity of the nation before partisan politics.

Let this be a clear delineation, that while Chet hails from the heart of conservatism, he is neither a Blue Dog nor a conservative.

Chet's value system has become skewed by the promise of political power. As my Daddy would say, "His plumb bob doesn't hang true right." By reading Chet's description of his faith, it is clear he designates the IRS as the great Collection Plate from which he can dispense the lucre according to his own charitable ideals.

In Chet's world the victims are not the taxpayers trying to make ends meet with what the government allows them to keep; but those who just can't get enough "charity" dispensed through "Bishop Edwards'" munificence in order that their every problem be solved. When political aspirations cause a man to legislate in direct conflict with the will of the people, that man must be removed to allow another to take his place.

There is a man to take his place. Rob Curnock would be an added voice to the Republicans in the House that are calling for a bold energy plan: All Of The Above. The Republicans are the party of ideas. The Democratic Party is the party of "No!"

August 1, 2008, Speaker Pelosi thought she could send the House of Representatives home for adjournment without a vote, or even debate, on solving the Energy Crisis. She turned off the lights, cameras, and microphones. She emptied the Press Gallery thinking the story was over.

Thanks to Rep. John Culberson and Real Time News, she thought wrong.

Verse of the Day

Nancy Coppock
In between being a beloved wife and self-employed as a decorative artist, I try to fit in politics, reading, quilting, and writing.